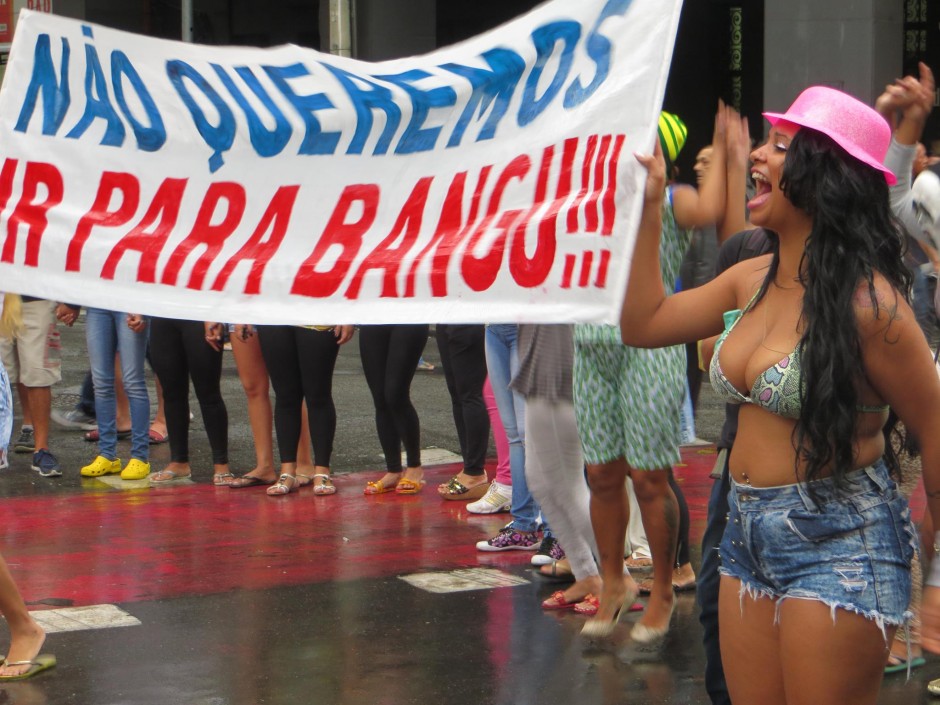 In preparation for this summer’s World Cup and the 2016 Olympics, Rio has been undergoing the biggest prostitution crackdown in a generation, closing venues, arresting prostitutes, even seizing condoms as evidence of a not illegal activity – all in the name of cleaning up the city’s image before the tourists arrive.

On the other side of Guanabara Bay, Rio’s sister city Niterói has not been immune from the human rights violations, where police illegally arrested eleven prostitutes last week and sent them to jail overnight

This is a report of the April 19 prostitute’s protest that ensued. Written by anthropologist Soraya Simões, with photos by filmmaker and activist Laura Murray, this was first published in prostitutes activism newsletter Beijo da Rua (Kiss from the Street), and is reprinted with permission from the authors: “I ONLY GIVE WHAT IS MINE”

April 15, 2014: Niterói inaugurates a new era! Prostitutes working in Building #327, known as the Bank building (for being next door to the Federal Savings Bank, or Caixa Econômica Federal), on Amaral Peixoto Avenue, principal artery of the commercial center of the old capital of the state of Rio, gave a show of charm, beauty and citizenship by coming to the streets to declare their profession, and for the misinformed, clarify their legality.

With banners saying “Prostitution is not a crime,” “We want to work, “CBO 5298-5 Lei 8212/91″ (the registration under which sex workers are registered with Brazil’s Ministry of Work and the law including them in federal social security), and “We don’t want to go to Bangu,” they protested the criminal action of the police, who days earlier invaded the rooms where they attend to their clients.

The result of this unexpected action was the arbitrary retention of eleven prostitues, who spent the night in the police delegacy before they were taken, the next day, for the Bangu precinct.

Prostitutes responded to the illegal police brutality suffered by their colleagues with cries throughout the streets clarifying for the population of Niterói the legality of sex work. Showing their faces to the public with make-up and good humor, about 100 prostitutes stopped traffic on Amaral Peixoto Avenue and Rua da Conceição, near the 76th police precinct.

They were surrounded by sympathetic store owners, passers-by, bus passengers, executives, cyclists, men and women of all ages, who applauded them and took photos (even the municipal guards took out their cell phone cameras to register the act!). Many joined the protests and others made a point to express their support for the movement of prostitutes in favor of their right to work with safety and respect.

Following their rhythm, the city had a chance to stop and appreciate the unparalleled exuberance of manifesting one’s right to exist. Nobody left the protest unchanged. “Police, you are my client”

Arriving at the police precinct, the prostitutes called for the delegate, who did not appear. Undeterred, they took the opportunity to send a provocative chant: “Police, join us! You’re our clients!” or “Police, me prende! You are my client!” [“Me prende” in portuguese has the double significance of arrest me / hold me].

Protesters from other movements and a city councilwoman seized the moment and the megaphone to talk to the crowd. They spoke manifestations of support in front of the delegacy before the procession proceeded to City Council, where it remained with banners and chants, taking the stairs.

All of this happened under a slow drizzle of rain, which was not enough to wipe off the make-up of the protestors or dampen the enthusiasm of those who had to see it to believe it. “Prostitution is not a crime!”

Returning to the already legendary Building #327 on Amaral Peixoto – “Come to the Bank with us!”, chanted the prostitutes – a historic meeting held in the hall of the building laid the basis for an activism that promises to keep the Smile City [Niterói’s nickname] animated.

Indiarana, a militant prostitute and member of sex workers rights organizations Davida and Daspu, and member of the Center for Prostitution at the Federal University of Rio de Janeiro, spoke about legal rights prostitutes have to work, to much applause. She was followed by Gabriela, a prostitute at #327 who had been taken to the Bangu precinct, who manifested her immense pleasure with her colleagues’ protest and the support of sympathizers and activists.

Before prostitutes and clients returned to the rooms of #327, they were served hot dogs and juice in the lobby by the elevator to quench the tireless protesters.

Applause, smiles, bright looks and the realization that there are many men and women in support of prostitutes and their rights!

I give head / go down on women / If I’m going to hell I’ll even give the devil head!

Mr. Delegate, where did you go? I only came to see you!

Ooh, ooh ooh, I want to give you my booty!

Take your hands off of me and let me work!

Tomorrow is a new day and I have bills to pay! Written by anthropologist Soraya Simões, with photos by filmmaker and activist Laura Murray, this post was first published in Portuguese in prostitutes activism newsletter Beijo da Rua (Kiss from the Street), and is republished to Red Light Rio with permission from the authors.

Soraya is the author of Vila Mimosa, an ethnography set in Rio’s red light district. Laura Murray documented the last years of Gabriela Leite, Brazil’s #1 Puta, in her documentary A Kiss for Gabriela.