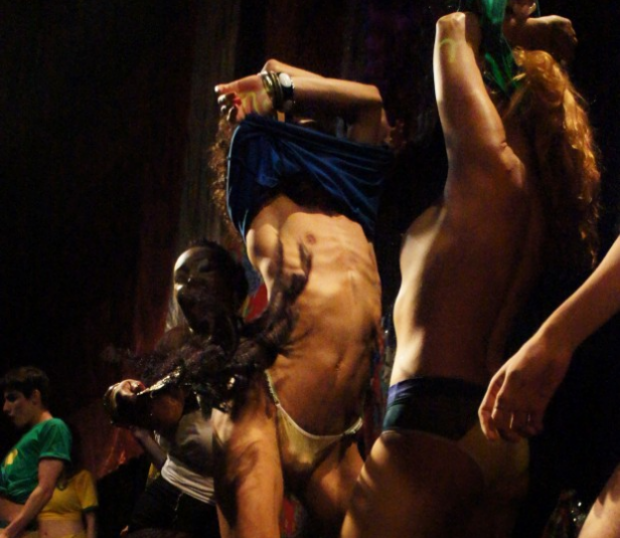 On sex workers and the respect we all deserve

This story by Gabriella Feola was published in Papo de Homem on June 21, 2014 (link) and has been translated into English and published on redlightr.io with permission. Gabriella Feola is a journalism student at the University of São Paulo/USP, is obsessed with Latin music, and thinks “sex” should be its own editorial category, just like “sports.”

I was looking for some sex workers to comment on how they thought business would be for them during World Cup. Dozens of women hung up on me when I called. There’s a big fear of assuming your identity as a puta (“whore”), picking a name to call yourself and talking as a puta, because putas have no voice. They have a body but no voice.

Unlike almost all the other women I called, Naty Harper wanted to be heard and invited me to a fashion show for Daspu, a Rio fashion label for putas and by putas. We left the subject of World Cup behind.

Friday the 13th they were commemorating International Sex Workers Day, Puta Dei. And the fashion show wasn’t just a catwalk to show off new trends in short and provocative clothing. It was a form of identifying as puta without being ashamed of it.

When the host announced the show, you didn’t see that long procession of women walking in a straight line. Everyone came in together, women, men, putas, artists…. The order was to break order. Whoever wanted to, took off their clothes. Whoever wanted to, danced funk. Whoever wanted to had fun. I had the urge to leave my camera with someone and go up there and dance and reinforce the sense of pride in the freedom I saw shining in panties, shirts and nipples.

Daspu was founded by Gabriela Leite [Brazil’s #1 Puta], a daughter, mother, grandmother and puta. A woman who wasn’t afraid of showing her face, who fought till the last day of her life for the recognition of her profession. Those who knew Gabriela talked to me about her with a gleam in their eyes. Betânia Melo, a puta feliz, told me that her life was never the same after Gabriela, that she taught her to take pride in her profession, to stop hiding and join the fight for their recognition.

The lack of respect and lack of rights of putas crossed me on the street on my way to the show. I was in Luz, near the Julio Prestes station, an old area of prostitution. I stopped at a police outpost to ask for information, and I saw a lady about 50 years old complaining to the police. She said she had negotiated a program (programa – “trick”) with a client, did what they had agreed on, and he left as soon as it was over without paying her. Worse, he stuck her with the bill for the motel room.

The police agreed with her like when someone doesn’t want to disagree with a crazy person. But there was nothing to do. She wasn’t a decent woman who was assaulted, she was just a puta. A puta doesn’t have the same rights, as if by putting herself on a street corner looking for clients, she gave up everything she deserves: dignity, physical integrity, and recognition for the work she does.

That night, with the ladies of Daspu, I learned a lot of things. One of them is that putas don’t sell their body. They offer sexual services. This shift in vocabulary is very representative, because it ensures a woman that she is a sex professional with power over her own body.

Even if a man is paying, she’s still owns her own body and has power over it. She’s a professional like anyone else and she has rights. After all, people who do non-sexual work, like me, also submit our bodies to a type of service, be it intellectual or manual, to receive our checks at the end of the month.

Puta Dei demonstrates that putas are women as much as any other woman, workers as much as any other worker. Betânia told me, with her chin up and a smile on her face, that the only difference is that “we [prostitutes] make our own money, we negotiate our own salary. And you’re in an office or some other space where you don’t have the same freedom we have as prostitutes.”

When the Daspu team got on the stage and showed their faces, they wanted recognition and respect. In that moment, the green and yellow colors they were wearing was a symbol of their affirmation of their right to be a part of World Cup Brazil and work.

In Rio, principally, the government has removed sex workers from their places of work and even arrested some of them, as if their work was a crime. It’s not. Trafficking in persons is a crime. Exploiting minors is a crime. Prostitution is not a crime [and never has been in Brazil – same goes for sex tourism]. When the media criticizes sex tourism, they are putting prostitution in the same category as sexual abuse. Sex workers are fighting for the recognition of their profession, their right to work, precisely so they can exit the margins, exit spaces associated with crime, trafficking and abuse.

While they put on their make up and did each other’s hair, women and men were declaring their right to prostitute themselves without recrimination. “We’re adults, owners of our own bodies, and we are not  hurting anyone by prostituting ourselves. We have the right to make money like any other service provider. Let us work.” This is what many of them said.

“Why do people always look at us as either someone they should feel bad for, or someone who is destroying society?” Betânia talks with the urgency of someone who can’t take it anymore in people’s imaginary gutters. Prostitutes were the first women in the world to conquer their financial independence, pay their own bills.

Betânia talks about her revulsion when she hears people talking about how bad they feel for prostitutes, how prostitutes are women who had no other choice. “Whoever says that is not a Puta. If you’re not a member of this profession, you don’t count.”

That night, I met women who had choices. one of them was Lola Benvenutti (@LolaBenvenutti), a literature student at the State University of San Carlos, who opted for prostitution on her own and spontaneous accord, and is today one of the big names in the industry.

Talking with Naty, the woman who invited me to the show, she tells me she graduated in journalism and worked with auto advertising. She introduces me to her boyfriend, “he came today.” She tells me about her daughter, who is 14, who knows what her mom’s profession is and doesn’t have a problem with it. “If it’s good for me, it’s good for her…. There are days when the house is full of her friends asking me questions.”

“We’re all the same woman, we’re all mothers and daughters. We have to stop thinking that sex workers are different.” Karina Buhr is talking with us in the dressing room, and for her, this is the message that has to stick.

Gabriela once said, “A prostitute is not a slut or the result of savage capitalism, but the direct lineage of a society that is afraid to death of showing its sexuality, and consequently feels profoundly threatened when a prostitute shows her face. The day I showed my face as a prostitute, everyone was shocked, because they realized I am no different from other women.”

I confess I haven’t read Gabriela’s autobiography, “Filha, mãe, avó e puta”. But now my desire to is inevitable, after hearing so many people talk about her with their chests puffed out in pride, with the feeling of privilege of having known this woman who fought so hard for her profession to be finally recognized on paper and on the streets.

Ah… Gabriela also wasn’t a prostitute for lack of options. She was a sociology student at the University of São Paulo/USP, and she was working in an office when she left it all behind to live off her own body.

But unfortunately at this incredible event, I felt what Naty told me – that nobody cares about prostitutes. With all the production of this fashion show, there was not a single person from the media. Just me.

The next day, a number of publications launched the news that the event had happened, but the accompanying photos weren’t even from the right event or day. For the rest of the magazines, sites and newspapers, it was not news of any importance. For me it was. Maybe because my name is Gabriela, just like Gabriela Leite, just like Gabriela Natalia (Lola’s real name), I think what they have to say is important.

If I had to crunch all of this into one sentence, I would just say that it’s time to stop saying puta to offend someone, because this word is one of the best adjectives there is. “Ela é uma puta mulher, e merece um puta respeito” – she’s one hell of a woman, and deserves a hell of a lot of respect.

Read this story in Portuguese in Papo de Homem: On Daspu, International Sex Workers Day and the respect we all deserve