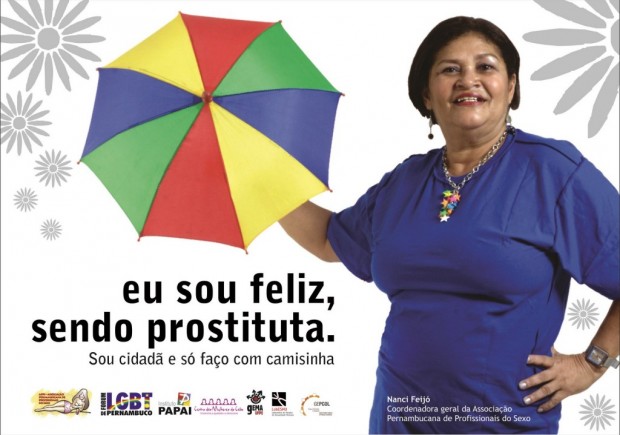 “I’m happy being a prostitute”

Laura Murray is a filmmaker, activist and PhD student studying sex worker activism and politics in Brazil. In an expansion on her blog post published at akissforgabriela.com, Laura explains how the Brazilian Minister of Health celebrated International Prostitute’s Day in June – by censoring an HIV prevention campaign:

June has been a month of inspiring and intense civil society mobilization in Brazil. Yet prior to protests for lowering bus fares, political reform, and against corruption (a few of the demands), Brazilian prostitutes mobilized in response to yet another example that the country once internationally recognized as a leader in rights based HIV prevention programs has drastically changed.

On June 4th, Brazil’s Minister of Health, Alexandre Padilha, ordered that a poster reading, “I’m happy being a prostitute,” be removed from the Department of STD/AIDS. The poster was one element of a larger campaign entitled Without Shame to Use Condoms, launched on International Prostitutes Day (June 2nd). Censored: “I’m happy being a prostitute”

Sex workers developed all of the campaign material, which included posters and videos, during a participatory workshop in March of 2013 that was organized and sponsored by the Ministry of Health.

The campaign logo is an anime figure – “Maria Sem Vergonha” (Maria Without Shame)–created for an earlier campaign developed by the Ministry of Health in partnership with the Brazilian Network of Prostitutes in 2002. The original Maria Without Shame campaign was also re-launched on June 2nd (the adhesives are below) and is symbolic of the government’s previously celebrated solidarity and human rights based approach to HIV and STI prevention with sex workers.

In his decision to remove the poster, “I’m happy being a prostitute”, Minister Padilha alleged that he had not approved the material, stating that as long as he is Minister, the government would not produce “this type” of material. Conservative Evangelical groups in Congress quickly mobilized and questioned the campaign, making discriminatory and stigmatory comments and demanding an explanation from the government.

By the end of the day, the head of Brazil’s Department of STD/AIDS and Viral Hepatitis, Dirceu Grecco, had been removed from his position, and the Minister had requested that the ENTIRE campaign be taken offline. Censored: “Not without a condom, love”

The decision negates the rights of prostitutes to be proud of their work, to speak for themselves and to have access to the kind of health information based on citizenship principles that the Brazilian government itself has championed in the past.

Over the course of the week, others left the Department of STD/AIDS – some fired others voluntarily – and on Thursday evening, June 6th, the Ministry of Health relaunched an altered, sanitized version of the campaign, deleting the posters that discussed violence and citizenship.

Only the posters explicitly mentioning condom use were included, and two new texts where added: one replacing the mention of International Prostitute’s Day with the sentence, “Prostitutes who take care of themselves always use condoms”, and a text staying, “Life is better without AIDS. Get your condoms in health services. Aids still doesn’t have a cure”. Censored: “Every day we have to work to educate and prevent AIDS”

The erasure of any mention of rights is symbolic of previous government attempts to erase not only of the discussion of sexual rights, but also of efforts to literally erase and hide populations that are “inconvenient” to current moral agendas, political ambitious for power, and the image that Brazil is attempting to project of itself as a safe, “clean” and “respectable” for the July 2013 visit of the Pope and 2014 World Cup and 2016 Olympics. Censored: “My biggest dream is for society to see us as citizens”

This was for example the third time that the Minister has censored materials produced for HIV prevention.

In early 2012, Padilha censored a campaign designed for Carnaval that featured gay youth –one of the groups where HIV/AIDS has most increased in Brazil–and in March of 2013, the government cancelled the distribution of an educational kit for adolescents that mentioned homosexuality, drugs, and pregnancy.

The Minister’s decision to bow to political pressure is indicative of a politics of fear that favors gains in power over gains in human rights. Dominant political parties are afraid of losing votes from some radical evangelical groups that have gained significant political influence and favor moral beliefs ahead of democratic principles.

The most egregious example of this trend is the ascendancy of Pastor Marco Feliciano who, as an outcome of political negotiations, was appointed in March 2013 to the Congressional Human Rights Commission. Feliciano led the charge to condemn the Without Shame to Use Condoms campaign, and shared via Twitter that the Minister had even called him to apologize for the events.

Unfortunately, international coverage has trivialized the government’s decision. Rather than focusing on the human rights violations that this censorship represents and the dangerous conservative turn in Brazilian politics, the international media has used this as yet another opportunity to repeat the hype about feared “increases” in “sex tourism” and sexual exploitation of minors during the upcoming 2014 World Cup and 2016 Olympics. Censored: “Not accepting people as they are is a form of violence”

Prostitutes, AIDS activists, public health professionals, and researchers mobilized in response to events this week, organizing actions and publishing harsh criticisms. The Brazilian Network of Prostitutes published a brilliant response recognizing what happened as a violation of constitutional rights and prostitute organizations circulated statements and even made their own campaigns.

Many activists have called for Minister Padilha to resign and for an end to politics guided by moral agendas and political ambitions at the cost of human rights. Davida’s newspaper, Beijo da Rua, reported on June 11th, that sex workers involved in the campaign will send cease and desist letters to the Ministry of Health, revoking their releases and demanding the immediate suspension of the posters with their images.

In their letters, prostitutes “allege radical changes in the original campaign, which rather than privilege confronting stigma and prejudice as a STD and AIDS prevention strategy, only focus on incentivizing condom use, (thereby) transforming it into a sanitized and decontextualized campaign’”.

The story quotes Luzarina, who appears in the campaign and is also the Coordinator of the Paraiba Prostitutes Association (APROSPB) in João Pessoa:

I went one week without working to participate in this workshop, thinking that it would construct something new that would contribute to all of us, and today, I am embarrassed of the result…. I am a citizen and whore and I have the right to express my feelings. I am happy being a prostitute.

On June 18th, members of the Brazilian Network of Prostitutes met with representatives from the Ministry of Health.  As reported in Beijo da Rua, the government representatives apologized for what happened, yet insisted it was a “technical” rather than political decision.

In response, sex workers strongly disagreed with the hypothesis that it was apolitical, and demanded that the Ministry issue a public apology for censuring and altering the campaign,  immediately remove the censured campaign from the site, and, after these two actions, propose a meeting with sex workers within the historic parameters of partnership and in alignment with the principles of Brazil’s Unified Health System (SUS).

In solidarity with these protests, the original campaign is shared here as a way to fight censorship, recognize prostitution as a dignified profession and affirm women’s rights to express themselves and their desires as they wish, regardless of how their happiness interferes with political and moral agendas. Please join the fight by sharing it widely and promoting the visibility of prostitutes’ voices, images and rights! “I’m happy being a prostitute”

Want to get involved? International and friends of prostitutes can help support Brazilian sex workers actions: