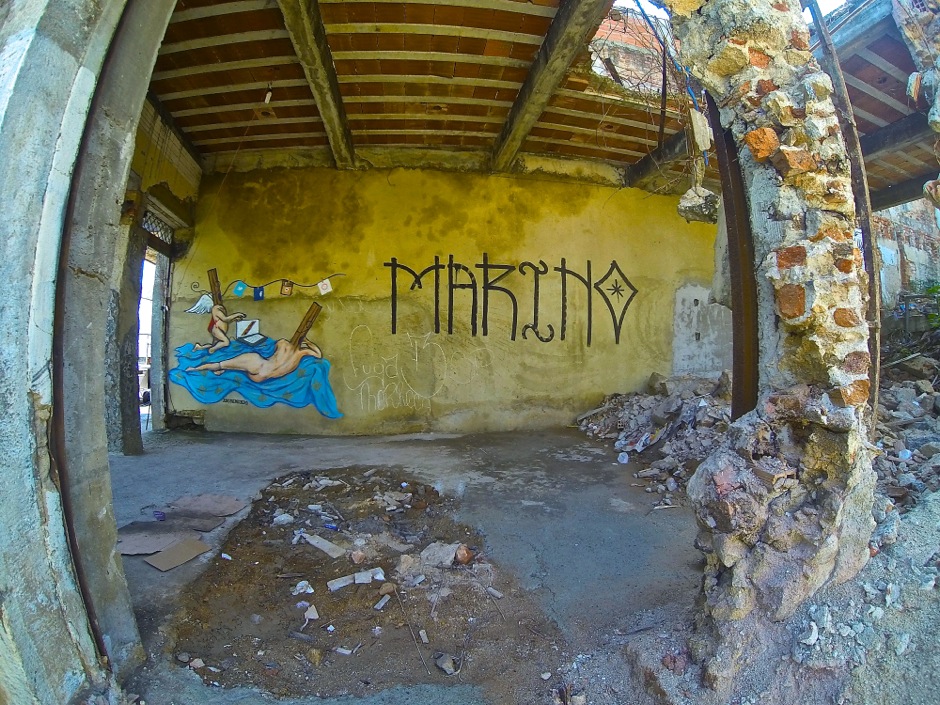 Rio has a history of warring with its prostitutes when tourists come to town that stretches back 100 years.

When King Albert of Belgium came to town in 1920, police rounded up the city’s lower-class prostitutes, arrested them and moved them out of sight to the outskirts of the city, inadvertently forming Rio’s first red light district. Police added walls around it in 1967 to hide it from the view of Queen Elizabeth II’s procession through the city. The red light district was moved – twice – to make way for the city’s “New City” administrative complex, first in the 1970’s and again in 1995.

Now, with six months to go till the World Cup kickoff, the red light district is under threat of eviction for the fourth time in 100 years. Always further to the periphery of the city, until the city grows and the periphery becomes prime real estate. Or the tourists come to town.

Blanchette:  In 1920, the visit of King Albert of Belgium to Rio de Janeiro occasioned an attempt to confine all the city’s prostitutes to the “Mangue” – or marsh – district [Zone 1 on the  map]. This sex work ghetto stretched west from today’s Viaduto São Sebastião along R. Julio do Carmo and R. Benedito Hipolito. The São Francisco de Assis Hospital, specializing in the treatment of sexually transmitted disease, is established in the region in 1922 [A].

Simões:  There were almost 3,000 women working in 200 houses of the Mangue. Among the foreigners, there were many women who, fleeing World War I and the hard life conditions in Europe, started to battle in the Mangue, transforming the old zone into a “fair of languages and dialects”.

Blanchette:  In 1943, Chief of Police Colonel Alcides Gonçalves Etchegoyen attempts to stamp out prostitution in Rio by closing down the Mangue. During this period, the construction of Avenida Presidente Vargas destroys some 500 buildings in this region. When the Mangue opens again in 1945, it’s restricted to the smaller rectangle seen here around [2].

Simões:  With the construction of the Av. Presidente Vargas, the Mangue and part of the city center suffered one of their first big surgeries. About 500 buildings were destroyed, along with four churches, a market, the mayor’s headquarters, and many brothels, spreading the fear of proliferation of prostitution to other parts of the city.

Simões:  Almost ten years after the construction of the big avenue, the experiment known as Mangue Republic began, a term coined by the Delegacia de Costumes e Diversões with the objective of registering the prostitutes in the area so they could be put under medical and police control.

During this time, the Mangue returned to the eminent position it had achieved in the 1930’s. Since the properties the brothels functioned in belonged to the city – due to a law dating back to 1834 – the rents charged to the donas de casa (house owners, or madams) did not exceed the laughable quantity of 1,000 cruzeiros.”

The occupation of a dona de casa was quite a coveted position. The term, a local signifier for “madam,” diluted the stigmatizing and compromising meaning of the occupation by concealing its relationship to the work, which was (and is) considered in the penal code to be pimping. Many of the donas de casa in the Mangue were foreigners, and they fell under suspicion of integrating international networks through which women from other countries arrived in the Mangue.

It was at this moment the police started to exercise their authority in a matter that legitimized the criminalized position of the madams, in that they came to substitute them, giving continuity to the exercise of pimping in the Mangue.

Blanchette:  From the 1960s on, gentrification pushes the Mangue’s establishments farther west. In 1967, Queen Elizabeth’s visit to Brazil prompts the city to board up the district so that it could not be seen from the parade route.

Simões:  The military order was to hide the Mangue with boarded walls. The “zone” finally had its limits geographically traced. What was meant to be a temporary measure to hide “social retardment” ended up constituting a well-planned plot of coercion and oppression, suffocating for those least favored by public policy…. In 1967 there were 1,670 women per day working in the Mangue, as registered by the police.

Blanchette:  In 1970, construction begins on the city’s new administrative center [B] and a large part of the Mangue moves to the “Mangue II” complex across Avenida President Vargas [3]. This is leveled later in the decade with the construction of the metro system garages. What is left of the old Mangue is razed to the ground in 1978.

Simões:  “Piranhão” (Big Whore) was the name that the population chose to baptize the new city hall, in a kind of anti-homage to the construction that definitively leveled the Mangue…. During the 1970’s, 3,300 homes were demolished…. The expectation of the end anticipated negligence by homeowners with the appearance of the houses, dying in the face of abandon. Destruction of the Mangue, 1977 (Photo via Thaddeus Blanchette)

Blanchette:  Several of the Mangue’s refugees establish themselves here in 1979 in small enclosed neighborhood known as Vila Mimosa [4]. Other women take to working the streets surrounding Praça da Bandeira.

Simões:  Vila Mimosa came to symbolize a resistance…. with an awareness this would be the last time they would start over in this territory.

Simões:  1987 was a historic for prostitutes in Brazil, and especially for those that worked in Vila Mimosa. In June of that year, they gathered in Rio de Janeiro for the First National Meeting of Prostitutes (I Encontro Nacional de Prostitutas), organized by Gabriela Leite, at the time a prostitute in Vila Mimosa and national leader of the prostitutes rights movement. The national press gave ample coverage to the event.

Months later, the prostitutes of Vila Mimosa once again made headlines, when threats made by representatives of a pastor named Nilson Fanini, owner of the extinct TV Rio, which had recently moved in to the building next door to Vila, were made public. With the argument that it was necessary to expand his studios, Fanini sent his representatives around the neighborhood of Vila Mimosa with the attempt of buying the property. Some say the pastor’s agents went so far as to threaten to kill some prostitutes.

Some homeowners, afraid of the situation, ended up accepting the proposed price, which created a schism within the group and a climate of uncertainty, and mobilized a diverse group of artists and intellectuals in favor of Vila Mimosa’s cause. The impasse led the mayor, Saturnino Braga, to issue a decree putting the group of brothel houses under public utility, subject to expropriation by the City. Under new guardianship, and “schooled” by the expropriations they’d already suffered, the prostitutes knew the risk of removal wasn’t absent – just delayed.

“O Mangue Resiste” (the Mangue resists) was the name chosen for an event on December 10, 1987, at the nearby Circo Voador (Flying Circus). A letter from [masterful Brazilian writer] Jorge Amado was read at the opening of the event, which was attended and supported by a range of artists, including the actress Lucelia Santos, singers Martinho da Vila and Elza Soares, and the violinist Turibio Santos.

I wish I could be there in person, for the public act of December 10 at Circo Voador, to assure my total solidarity with the National Network of Prostitutes engaged in a hard and difficult fight to denounce the violences that the inhabitants of the region of the Mangue, especially the prostitutes, are victims of; who are being denied any rights; who are, at a minimum, victims of “grilagem urbana, real estate speculation, corruption, administrative irregularities and social discrimination.”

What’s happening is monstrous and should wake up the indignation of each of us, of all of us who wish for the end of arbitrary [treatment] and discrimination. We join our voices and our forces with those of the inhabitants of the Mangue, who are pleading that the region be transformed into an area of preservation.

We look to impede another crime from being committed against the population of Rio, in particular, against the social group most terribly marginalized and persecuted: The prostitutes. Since I can’t be personally present, I send my solidarity that with this act we choose in defense of democracy and human rights.

After the incident with the pastor passed, prostitutes and madams of Vila Mimosa formed the Associação das Prostitutas do Rio de Janeiro, with headquarters in Vila Mimosa. The mayor’s headquarters, nicknamed “Piranhão” (Big Whore) in homage to the red light district the city razed to build it . (Julie Ruvolo)

Blanchette:  Expansion of the city’s administration complex leads to Vila Mimosa being expropriated in 1995. With the indemnification received, the complex moves to an old warehouse on Rua Sotero dos Reis [5]. Some 78 small venues eventually become established here. Street work also continues near Praça da Bandeira and to the northwest, near Quinta da Boa Vista.

Simões:  Only a month before the end of the period of time the Mayor gave to turn over the houses, the then-president of the Association of Prostitutes of Vila Mimosa, Eunice Coelho, announced the purchase of a warehouse in Duque de Caixas, using half of the money the city had paid in reparations. There was wide insatisfaction with the choice of location, which was far away, deserted and next to a highway. Soon after, Eunice disappeared, and with her, the rest of the money that should have been divided with all the other donos de casa.

With only 15 days left before the demolition of the houses, madams and prostitutes gathered their money together to buy another warehouse, this time on a street in the Praça da Bandeira, located less than a kilometer from the place they would soon have to abandon. On January 2, 1996, prostitutes and madams left the past and headed to Praça da Bandeira, the current location of Vila Mimosa.

Blanchette: In 2011, the State government announced its intention to expropriate the area around Rua Sotero dos Reis to make way for a bullet train station.

Once again, an area that used to be on the city’s margins finds itself in a prime location – like the swampland Rio’s prostitutes were sent to in 1920 that is now the famed Sambadrome;  the Mangue they were sent to, which now houses the Mayor’s headquarters; and the first Vila Mimosa, now part of the New City district.

Vila Mimosa is currently hiding in plain sight, a block from the busy Praça da Bandeira; half a block from a major construction site for the metro expansion; one mile from the Maracana Stadium; a mile and a half from the multi-billion dollar Porto Maravilha port renovation project.

As Rio undergoes the biggest prostitution crackdown and brothel evictions in a generation in preparation for next year’s World Cup and the 2016 Summer Olympics, rumors are swirling through Vila Mimosa that the red light district will have to move once again.

Some say the bullet train from Sao Paulo to Rio – a $20+bn project on pause at the moment – will terminate in Vila Mimosa. Others say a consumer package goods multinational is in negotiations with AMOCAVIM, the governing association of Vila Mimosa, to purchase the area. A proposal for an Audiovisual City to host TV productions, with studios and four movie theaters, is also destined for the same neighborhood. Stay tuned.

Featured photo: The entrance to Sotero dos Reis. Vila Mimosa starts half a block to the right.