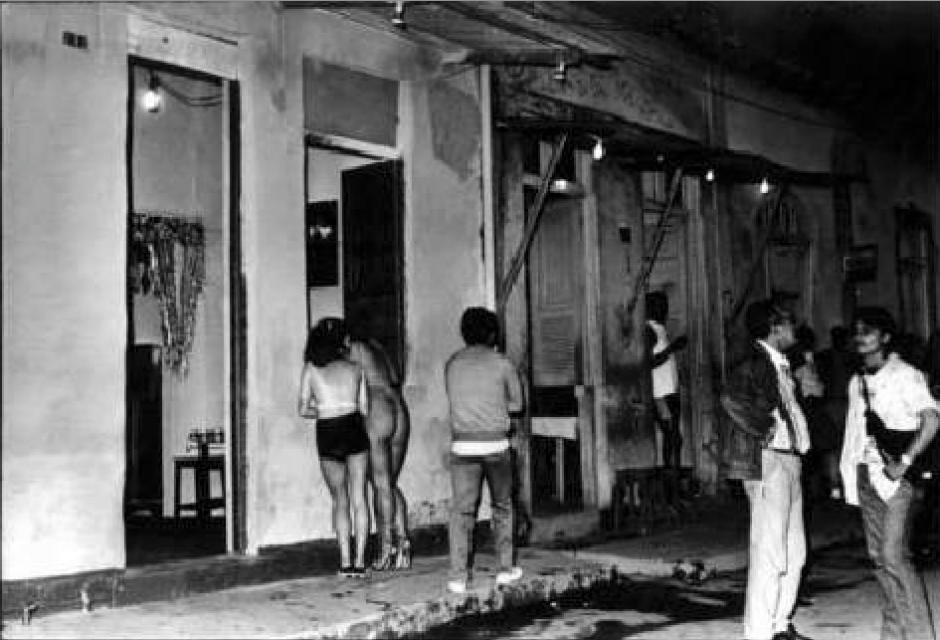 Published to RED LIGHT RIO in six parts, the paper situates Rio’s red light district on the larger map of sex venues in Rio, and in the broader historical context of Rio’s extra-legal regulation of a profession that is not illegal in Brazil.

Part I is a history of sex in Rio.

Part II discusses the fuzzy legality of prostitution in Rio.

This section walks through how Rio cycles between “general official tolerance” and “often violent campaigns to eliminate sexual commerce” in the hands of the police.

From the 1940s on, prostitution in Rio de Janeiro can best be characterized by a general official tolerance, frequently punctuated by sharp and often violent campaigns to eliminate sexual commerce or at least restrict it tightly controlled areas. Inspector Armando Pereira, who studied prostitution in the city for the better part of 30 years, described this cyclical movement in 1967:

Brazil has an abolitionist tradition. During the Republic, we didn’t sanction laws or measures which would regulate prostitution. The European problem thus does not exist among us… However, in practice, we have always adopted a mitigated form of regulation. We tolerate houses of prostitution… There is no continuity in this policy…, however. There have been periods in which all the houses are closed. Others in which [the police] only fiercely persecute streetwalkers. Still others in which they attack the numerous sex hotels now proliferating across the city.

The organization of prostitution in Rio changed substantively due to one of these strict abolitionist campaigns. In 1943, Chief of Police  Colonel Alcides Gonçalves Etchegoyen decreed the expulsion of all the boarding houses and other prostitution venues from Glória, giving their residents 30 days to evacuate. “When this time limit had run out,” legal scholar Waldyr Abreu writes, “[Etchegoyan] asked someone, presumably a jurist, [as to what he could do] and was informed that the law had nothing to say about prostitution.

So, with characteristic simplicity, [the Colonel] liquidated the problem, manu militari, both in Glória and in the Mangue” by putting several thousand women into the streets. Lapa’s brothels, rendez-vous and boardinghouses were also closed.

As occurred during the previous crusades of the 1920s, most of the city’s prostitutes seem to have retreated to clandestine activities during Etchegoyan’s brief reign as police commissioner. According to Armando Pereira, who became a police inspector in the 13th district around this time, the Mangue became an “underground citadel”, with many of its women continuing to work in the neighborhood’s streets and tenements.

The crackdown was short-lived, however. In 1945, official tolerance for prostitution was once again reinstated. The Mangue began operating once again, although reduced in size. Pereira explains the abrupt about-face in the following terms:

[T]he women had invaded the city’s residential neighborhoods. They went after men on the public streets, right in front of the police, confronting the men’s families. The press went mad. Complaints poured in from [the middle class neighborhoods of] Copacabana, Tijuca, Gloria and Catete.

The only solution – according to those responsible for Rio’s security and morality – was to once again confine the women [in the Mangue], offering them a discrete place to carry out their work where the masculine population could easily find them.

By the mid-’50s, the prostitutes of the Mangue were almost all Brazilian, usually women recently arrived from the country’s rural zones: “only the madames were foreign (and then not always): Poles who said they were French, stubborn Jewish women who’d survived the crisis” of the neighborhood’s closure in 1943.

In 1967, a census conducted by police officials in the Mangue found that the majority of the 600 women in the Mangue were illiterate immigrants from rural Brazil. Meanwhile, only 12 foreign women were left, including 77 year old Philipine Renoir, born in 1891 in Belgium, the one remaining “French” prostitute in the Mangue, a refugee from “the old days of splendor in Lapa”

In 1954, the police in charge of the Mangue – the Customs and Diversions Division of the 13th Precinct – inaugurated an unusual intervention which attempted to put some degree of direct control of labor conditions into the hands of the prostitutes themselves. The Prostitution Section of the CCD kicked all accused madams and pimps out of the district’s houses and took direct control of the brothels. It then turned them over to the sex workers themselves, who held direct elections to determine who would be the “manager” on a rotating basis.

This new form of “cooperative management” of the Mangue – nicknamed “the Mangue Republic” – fulfilled the letter of the UN’s Convention for the Suppression of the Traffic in Persons and of the Exploitation of the Prostitution of Others, which Brazil ratified in 1958, an international treaty prohibited police authorities from subjecting prostitutes “to special registration or to the possession of a special document or to any exceptional requirements for supervision or notification”.

As Juçara Leite points out, however, while cooperative management would seem to have given the prostitutes a significant degree of control over their conditions of labor, it quickly revealed itself to be another form of extra-official regulation of sex work by the police. Prostitutes were arrested and not permitted to work outside the Mangue.

Moreover, they continued to be registered by the 13th Precinct and without police permission, they could neither work in the Mangue nor move to another house. Women who wanted to quit prostitution, in fact, had to ask the police to be allowed to do so. Working hours (noon to 2AM) were also defined by the police.

Thus in spite of Brazil’s formal adherence to abolition, police control of prostitution, supplemented by medical surveillance, continued de facto in Rio de Janeiro, as a tacitly accepted understanding of the police’s social role. As Inspector Pereira observed (with more than a touch of cynicism), the job of the carioca police was to close down all prostitution venues outside of the Mangue while “not only tolerating, [but] effectively managing” those within the district itself.

This form of police-managed sex work would endure in Rio de Janeiro from 1954 to 1969. With the beginning of the military dictatorship  in 1964, however, Rio began to pass through yet another of its periodic waves of urban renewal and moral hygienism. The Mangue was targeted by successive urban renewal projects that included the construction of subway lines and several modern highrises.

The district’s demolition began in the late 1960s but picked up speed in December 1970, with the city’s appropriation of 28 properties along Rua Pinto de Azevedo.  A large part of the neighborhood was then bulldozed in 1973 to make way for the subway. 2000 women continued to work in the so-called “Mangue II” complex on Rua Dr. Ezequiel on Rua Luis Pinto, however.

The mortal blow to the Mangue finally came in November of 1977, with the razing of the rest of the neighborhood. The film Mangue by Cecilia Resende documents the brutality of the final expulsions between December 1977 and February 1978. The police arrived before dawn and began to set fire to the neighborhood’s remaining houses. Many women, faced with the prospect of nowhere else to go, attempted suicide.

The drawn out destruction of the Mangue pushed prostitution into the streets surrounding Praça da Bandeira a few blocks west of the old red light district, however.  Here, in 1979, the survivors of the Mangue established a new concentration of 44 small brothels along the Travessa Guedes in what became known as Vila Mimosa.

Continued urban redevelopment in the region, most particularly the construction of a new City Hall complex (immediately baptized by cariocas as “The Big Whore”) led to yet another expulsion of the sex workers in 1995, this time with indemnification, however.

The money received allowed Vila Mimosa to relocate even farther west, to an abandoned warehouse along R. Sotero dos Reis. Today, “VM” contains some 78 bars and commercial sexual venues packed into a block-long strip surrounding the old warehouse, with perhaps some 1000 – 2000 women working as prostitutes in the region (though not all at once). Sex generally costs from 10-20 USD for a 20 minute session in small, tiled “cabins” set above the bars. The women are generally “independent workers”, but 40-50% of the price of the trick goes to the bar owners as “cabin rental fee”.

Vila Mimosa is tolerated by the carioca police as a “controlled” red light district and, in this sense, many of its relations with power replay those of the earlier Mangue. Police no longer force women to work in the district, but raids against sex workers occur with much greater frequency outside the boundaries of VM.

In fact, one could say that Vila Mimosa is the old Mangue, successively relocated at enormous cost and violence, but essentially the same institution, although with new owners, managers and sex workers. It is a tribute to the durability of Rio’s policy unofficial regulamentation of segregated prostitution that the city’s most notorious lower-class red light district has managed in spite of the best efforts of two dictatorships.

Read on Blanchette and Schettini’s Sex Work in Rio de Janeiro: “More than tolerated – effectively managed” in Part V: The Current Status of Prostitution in Rio.

Featured image: Vila Mimosa in the 1980’s (via Thaddeus Blanchette)

This paper was given at a seminar at the International Institute of Social History as part of their Selling Sex in the City project. It will be published later this year as part of a book dealing with the history of sex work in several dozen global cities, and is republished to REDLIGHTR.IO with permission of the authors and the IISH.

45   Although Abreu does not specifically mention Lapa, the boundaries between that region and Glória were imprecise, with the main concentration of houses involved in prostitution located on the border between the two neighborhoods. “Glória”, in this case, almost certainly takes in the houses of Lapa. In A República do Mangue, Juçara Leite

49   Readers are cautioned to remember here that these two categories are legal, accusatory constructs which could be applied to a wide range of people who have social and/or economic exchanges with prostitutes and not only “exploiters”.

50  UN, Convention for the Suppression of the Traffic in Persons and of the Exploitation of the Prostitution of Others, 1949. Accessed at http://www.ohchr.org/Documents/ProfessionalInterest/trafficpersons.pdf on 12.12.2013.