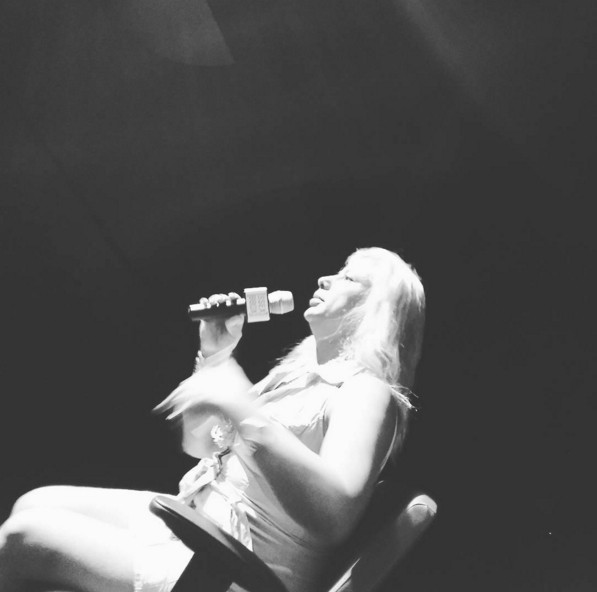 Indianara: “It’s more dangerous, in Brazil, to be a wife than a whore.”

Indianara is a veteran sex worker rights activist in Rio de Janeiro. She spoke at the Observatory of Prostitution‘s extension course, A Particular Revolution: The Brazilian Prostitutes Movement, at the Institute of Philosophy and Social Sciences at the Federal University of Rio de Janeiro on November 24, 2015.

I want to explain something I said in São Paulo that caused a lot of confusion. I was talking about how so many people say prostitution is a violent profession, how prostitutes suffer so much violence. And how last year, about 5,000 [Brazilian] women were assassinated by their husbands, partners, exes, etc. So I said that it’s more dangerous, in Brazil, to be a wife than a whore.

I didn’t say this to erase the violence that prostitutes suffer in their profession, but to remind ourselves that they only suffer these violences because they are also women.

The radical feminists like to label me as a “prostitute for X number of years who suffered such and such violence.”

How many women have suffered the same kinds of violence I have, within their marriages? There was a hair stylist in São Paulo who was killed by her husband. It happened in front of cameras and other clients. She was not a prostitute.

If we’re going to talk about dangerous occupations, let’s talk about teachers. How many times have I seen students assault a teacher in the classroom? Teachers also have a dangerous profession.

And they’re exploited too. We talk about how prostitutes are exploited, what about professors? Some of them have to organize these extension courses, like Soraya [Soraya Simões, who organized extension course with the Observatory of Prostitution where Indianara was speaking].

It’s these kinds of views people have about our profession and our lives that make it difficult for people to accept our profession, and make it hard for us to move about freely in society outside of our prescribed times of day.

I like to joke that I’ve spoken at so many classes at IFCS [The Institute of Philosophy and Social Sciences at the Federal University of Rio de Janeiro, where Indianara was speaking] and universities across Brazil that I could be a professor. After all, you guys like places [universities] like this that imprison practices, don’t you?”

It’s funny, when I run into students at 2am in Praca Tiradentes or Central do Brasil, and a student will stop their car or the taxi they’re in and yell, “Indianara, what are you doing in such a dangerous place at this time of day?”

What am I doing in Praça Tiradentes or Central do Brasil at 2am, if I’m not working? [Laughs]

“Ah, right! I’m so sorry! But isn’t this place dangerous?”

Dangerous for whom? This is where I was socialized. It’s where my friends are. It’s where I have history. Where I live my stories, my passions, my loves, my pains too. This is my space, this is my place.

You know where is dangerous for me? Dangerous for me is walking around Copacabana Beach at 3pm, when I run into all of you during the time of day that you’re free and safe to move around.

And for me, it’s dangerous. The sidewalk is a dangerous place for me to be during the day. The light of day is dangerous for me, but when it’s the middle of the night, the sidewalks are safe for me, and dangerous for all of you.

So the stigma against prostitution needs to be removed. Precisely because these spaces we are in imprison practices, they strip practices of their meaning and transform them into theory. And these practices, despite having been transformed into theories, were dictated through a patriarchal, sexist lens, right?

This is the problem. All the books you’re reading are written by men, overwhelmingly light or white, middle or upper class men. They’re rarely Black. So Black people don’t exist. And because of it, all these stories are stripped of their meaning.

It would be good if we could teach them the real story of the Anglican church of England. This is how the Anglican religion was born: It came about because Anne Boleyn wanted to give it up to the king, so she decided to be the queen of England. Period.

Summing it up, that’s the cornerstone of the Anglican Church. The Pope didn’t want to give the king a divorce from Catherine of Spain so he could marry Anne Boleyn, so she decided to give the “most sacred” thing she had to give, which was her body. And she wanted to, so she did a good job of it. She prostituted herself all the way to the crown, even though she never got to wear it, because she lost her head.

But it was her daughter, Elizabeth I, who ended up on the throne of England.

If we talked about these women as they actually were, not as “women ahead of their time, feminists” but as women who actually traded sex for power. They traded sex to maintain relationships.

Then we would be empowering other women and telling them, “Yes, another life is possible.”

Because when you go to introduce your boyfriend to your family – not me, because I don’t follow this custom of presenting my boyfriend to my family. I would never do that – but when the vast majority of women go to introduce their boyfriend or future husband to their family, what does the family ask? “What does he do for a living?”

And behind this question is another one: “Is he going to be able to pay for you?”

So when we talk about prostitutes, we need to remember that a lot of women in prostitution  – a lot of our friends – say this: “Today, yes, I am free. Here, in this place, I am free.”

Because they didn’t have another option to work, when they left their abusive or violent husbands, other than prostitution. And there, they found the freedom to work and to continue to support their children.

They saw that there is a stigma that has been placed on prostitution, but that it isn’t actually like that. They felt free because they could be paid for sex and only sex. They weren’t obligated to clean the house, take care of the baby, and after they were exhausted at the end of the day, to have sex with their husbands, or sometimes, be raped, because sex with your husband is never rape, because you belong to him, and you’re obligated to have sex with him, right? So we don’t call that rape…

I always say that I like to be a prostitute, because as a prostitute, I just get the good part. The wives clean them, pass them over, and I charge them for sex. And the wives, the “proper” ones, should thank us prostitutes, when their husbands come home tired and make up an excuse not to have sex, “Not today honey.”

And you go, “Thank God he doesn’t want it today.”

And it’s only because he just got back from paying a prostitute.

So we are also escape valves, or even salvation, for these women in moments like these.

Being a woman is nothing more than this: A separation to say, “This is not a man.”

It’s funny when women take up these words like femininity and feminism, because feminism is nothing more than a medical term that was used in the times of tuberculosis to refer to men with tuberculosis.

“Feminine” was a term to refer to men who had a fragile appearance, weak hair, a pallid appearance. So they were considered “feminine” because they had tuberculosis. This is more or less where the word comes from.

It’s complicated, then, when I strip these terms of their contents and say that I will no longer accept certain definitions or categories to be placed on me.

But what is all of this rationality good for? Just to destroy the planet?

To destroy nature, divide the world, discriminate against others, have prejudice, create stigmas, erase history?

Me, for example, I spent a year and a half in jail for pimping.

[Addressing the audience:] Yes, I was put in jail for pimping in France. That happened. I have a title none of you have: I’m a persona non grata in all of Europe.

I was put in jail precisely because of the lack of regulation of the prostitution industry in France, because of this way we look at the human rights of certain groups of people as “wrong”.

When the authorities asked me, “You know these people rented these apartments to prostitute themselves?” I said, “Yes, I did.”

“And why didn’t you rent them to some other group of people? Like students, for example?”

I guess I could have exploit students instead, but I “resolved” to exploit prostitutes.

Look at how we’re taken out of this space, like Lourdes [a founder of the Brazilian prostitutes rights movement] was saying earlier, where we aren’t completely seen.

We’re only visible at certain moments. We can’t think for ourselves, we can’t make our own decisions, and we’re always categorized as victims.

So I like what Gabriela [founder of the Brazilian prostitutes rights movement] used to say, “I’d rather be the whore with no shame than the poor victim.”

So it’s complicated for us to exist in a society like ours today. I always like to say, “Don’t wait for society to change. I want to destroy it completely. I want to burn its books, empty its universities, turn them into brothels and put the whores in here to be the professors.”

So if I had to choose to be a lion or lioness, or some other beautiful feline creature… I wouldn’t. I would be a hyena instead.

I am going to eat your flesh and destroy your bodies, and then I’m going to sit on top of them and laugh, laugh, laugh. Until I see you guys deconstruct all of your gendered concepts and prejudices.